In the UK, a network of sites was set up to carry out a planned series of experiments on poplar grown in a normal UK cereal rotation in 3 different geographical locations.  This was the National Network Silvoarable Agroforestry Experiment.  Protocols were such that treatments imposed were the same at each site, to allow comparison of performance of different poplar cultivars in different climatic zones of England. The basic design was to allow comparison with extensive plantings in southern England by Bryant and May of poplar for matches in 8 m x 8 m layouts.

The sites were at the Royal Agricultural College (now the Royal Agricultural University) at 51o44'N; 2o0'W, Silsoe College (now Cranfield University) at 52o0'N; 0o26'W and The University of Leeds at 53o44'N; 1o15'W.   Whips of 4 poplar genotypes (Trichobel, Populus trichocarpa x trichocarpa; Robusta, Populus deltoides x nigra syn. Populus euramericana; Gibecq, Populus deltoides x nigra syn. Populus euramericana; Beaupré, Populus deltoides x trichocarpa syn. Populus interamericana) were planted at spacings of 6.25 m within rows, and 10 m between rows, in .  The sites were all down to the normal UK cereal rotation of the time, which extended into the 10 m alleys between the tree rows.  Annual measurements were made of tree diameter at breast height (dbh), tree height and yield of crops both in the alleys and in arable control areas away from the trees.

Some preliminary findings were presented in a handout at the Farm Woodland Forum annual meeting held at Leeds in 2001 (document revised in 2005).

More details of the experiment, including results, can be found in the final report to DEFRA project AF0105 The Impact of Silvoarable Agroforestry with Poplar on Farm Profitability and Biological Diversity from the UK Government portal.

The sites at Cranfield and RAU are not in current use, and no measurements are made. The site at Leeds is in set aside, and annual measurements of dbh are made.

Details of experimental silvoarable agroforestry in the UK are given in reports of the EU AGFORWARD project. 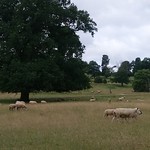 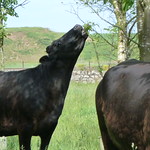 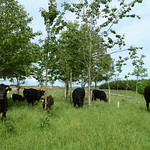